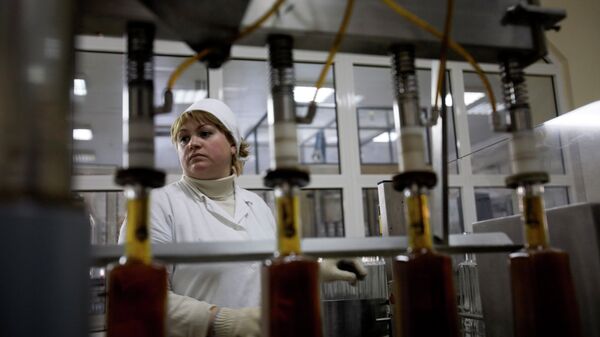 © AP Photo / John McConnico
factory Worker for the production of alcoholic beverages in Tiraspol. Archival photo
The Deputy Chairman of the Transnistrian Republican Bank (TRB – Central Bank of the unrecognized Republic), Alexei Miller suggested the possible fall of up to 30% of the exports of the Transnistrian Moldovan Republic (PMR) in 2020 due to pandemic coronavirus.
«Rather, the GDP growth rate in 2020 will be negative and the drop will be measured in double digits. This applies to industrial production. As for exports, we forecast a drop from 19 to 30%», — said Miller to the channel «the First of the Transnistrian».
In support of this, he cited data from a survey among business leaders, according to which the industrial optimism index amounted to almost 27% with the sign «minus». According to the Deputy Chairman of the PRB, this is one of the worst for all years of study.
«This suggests that the vast majority of survey participants are very skeptical about the situation. 81% of respondents said that industrial production fell. Four companies completely stopped», — said Miller.
World health organization March 11 announced the outbreak of a new coronavirus infection COVID-19 pandemic. According to the latest world health organization, worldwide there were more than 4.4 million cases, more than 302 thousand people died. According oberstab PMR, coronavirus laboratory confirmed the 787 Transnistrians, 30 people died, 349 recovered.
Transnistria, 60% of inhabitants are Russians and Ukrainians sought to secede from Moldova even before the collapse of the USSR, fearing that on the wave of nationalism Moldova will join Romania. In 1992, after a failed attempt of the authorities of Moldova force to solve the problem, Transnistria has become virtually beyond the control of Chisinau's territory.
Relevant data on the situation of COVID-19 in Russia and the world presented on the portal stopmanager.of the Russian Federation.
Source: ria.ru