© SK Rfcat video of the crash at Sheremetyevo airport in 2019, published RF IC 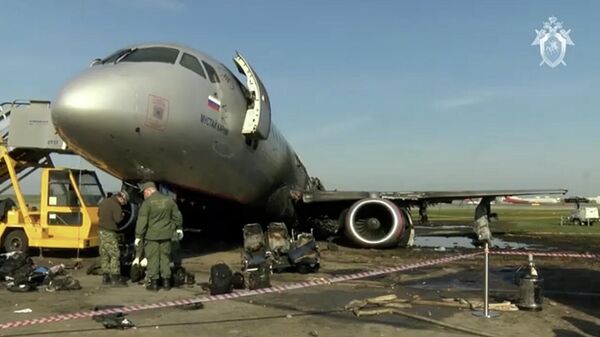 © RF IC
The-scenes video of the crash at Sheremetyevo airport in 2019, published by SK the Russian Federation. Archival photo
The Khimki city court of Moscow on may 21 will begin consideration of the criminal case about the crash of the Sukhoi Superjet 100 at Sheremetyevo airport in may last year, which killed 41 people, reported RIA Novosti in court.
«hearing scheduled for 12.00 noon on 21 may», — told the Agency interlocutor.
At the dock will be a single man, the commander of the ship Denis Evdokimov. He impute violation of the rules of operation of the aircraft, which, in the judgment of the RF IC, and turned into tragedy.
According to investigators, Evdokimov after returning to departure airport made «a rough landing» on the runway. In the RF IC noted that no further action Evdokimova, «committed breach of the rules, caused the destruction and fire of the plane».
In article «Violation of safety rules of movement and operation of air transport, entailed on imprudence death of two and more persons» Evdokimov threatens till seven years of imprisonment.
Sukhoi Superjet 100 «Aeroflot», EN route from Moscow to Murmansk, may 5 in the evening urgently returned to Sheremetyevo and made a hard landing after 28 minutes of flight. When landing he broke the landing gear and fired up the engines. According to the hydrometeorological center of Russia, that day in the suburbs was observed in the afternoon. According to SK of Russia, the disaster of the 78 aboard, killed 41 people.
Source: ria.ru